Ferti-Soil is a preparation of different enzymes to which a number of coenzymes have been added. These are elements that have a positive effect on the activity performed by the microorganisms. An important effect of Ferti-Soil is the faster breaking down of fresh organic matter through, among other things, the use of cellulase and similar enzymes. What makes this product unique are the specific ratios of different enzymes. Ferti-Soil also has a positive effect on soil pathogens leading to reduced disease pressure because, for example, Fusarium is impeded in its development (because the “home” in which it lives is demolished before it can develop).

Ferti-Soil therefore not only helps to accelerate the breaking down of organic matter, but also limits disease pressure. Various tests have demonstrated this applies to, for example, Rhizoctonia, Sclerotia cepivorum, Fusarium and Sclerotinia. Ferti-Soil has an effect that corresponds to that of, for example, Monceren, but at laboratory level it has proved to be even more effective. N-xt Fertilizers has carried out trials in which it was combined with N-xt FertiPhos for application in potatoes. This has enabled us to add a side effect to the FertiPhos application, resulting in preventing the occurrence of Rhizoctonia and other soil pathogens.

Recommendation: 0.5 - 1 l/ha, depending on the volume of organic matter. Perfect for mixing with N-xt fertilizers (e.g. FertiPhos)

Ferti-Soil in practice: breaking down of crop remains after harvesting

Ferti-Soil is very suitable for spraying over crop remains (such as corn, open-ground vegetables etc., see photo) after harvesting. After just three weeks the crop remains are breaking down and the fibrous structure is decomposing. See the photographs. 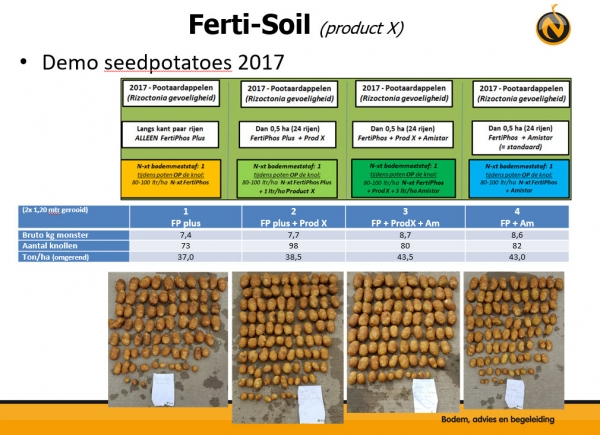 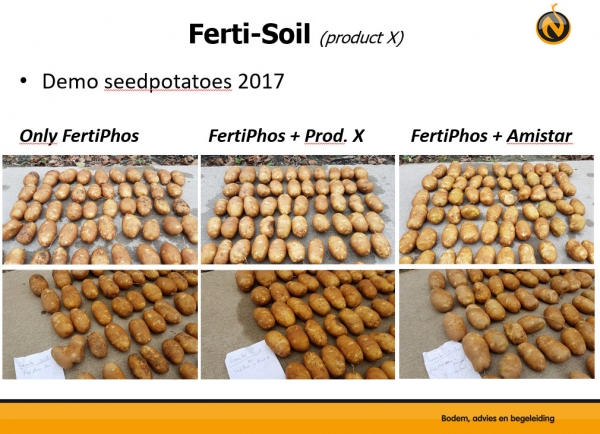