A few years ago, dairy farmer Jan Out (right on photo) heard about the N-xt Fertilizers vision on fertilization. The idea of making much better use of the soil's natural strength by bringing the soil into balance appealed to him. He decided to experiment with this. He can now see great results. Not just on the land, but in particular in the cowshed. Jan Out: “This fertilizing method has greatly improved the protein absorption in grass, and my cows are much healthier.”
It is very busy at the dairy farm of the Out family in Purmer. Yesterday and the day before a lot of grass was cut. Today it is being silaged. This is work that Jan and Anneke Out and their son Michiel (left on photo) like to outsource to a contractor. This gives Jan time for a chat with us about the fertilization of his grass and the effects of this on his livestock. “If you grow good grass, it's important it is also stored in the pit in the best possible way,” Jan Out explains. “Our contractor has the best machinery for this purpose. That's why we leave both cutting and silaging the grass to them. We can shake it ourselves, if that’s really necessary. If the contractor crushes the grass when cutting it, it can be silaged without shaking when the weather is good. That is the first gain of fertilizing grass with the products of N-xt Fertilizers. The grass is firmer and contains less liquid.”

Since Jan Out started fertilizing according to the N-xt Fertilizers approach, he has enjoyed his grassland management a lot more. “I am much more involved in what is happening in the soil. On paper, when the results of the soil surveys are known, but also in the field. I look at how the grass is developing and how the soil life is increasingly active.” The first effect of the different fertilizing method observed by Out was that the grass had become firmer. “It feels different as well. It is less limp and more likely to stay upright.” According to Out, this improves the flavour - and therefore the intake of fodder - when the cows are in the field and also when they are fed silage. Out: “What is striking is that I see a lot less heat generation in the silage. The turf has also become denser over the past years, which has reduced the weed burden.”

Out's 90 dairy cows are performing very well on the grass fertilized with N-xt Fertilizers. “This is hard to measure,” the dairy farmer explains. “But I very much get the impression that milk production has risen by 1 to 1.5 litres a day because of the better quality of roughage. One thing I’m absolutely sure about is that the protein absorption from roughage has increased a lot. I’ve been able to reduce the protein added to concentrates considerably, without this having any negative impact on milk production or levels. And I’ve taken this quite far: up to 15% below the recommended level.” Out believes that less but more stable protein also has a very positive effect on the cows’ health. “This benefits the life span, I’m able to keep fewer young cattle, and medicine use - 0.5 animal daily doses - has dropped to an absolute minimum. I’ve also halved the amount of silage additives. These are all economic advantages which definitely make up for the extra costs of N-xt fertilizer.”


On the heavy sea clay (55% lutum content) Out grows 55 hectares of grass, as well as 5 hectares of green maize and 7 hectares of barley for the cows. The barley is crushed and fed to the cows. After the maize and barley have been harvested, a green manure is sown. This is usually oil radish or white mustard. Out: “I sometimes wonder about growing winter peas or field beans as fodder. This would mean I would have to get even less relatively expensive high-protein concentrates, and we would become increasingly self-sufficient.”


N-xt fertilizers guarantee a better grass quality. Jan Out has experienced this first hand. However, the differences do not become immediately apparent in a standard roughage analysis. The reason for this is that only the protein level is measured, while the specific underlying amino acids pattern is not being considered. And this is essentially different in N-xt fertilized grass by comparison with grass fertilized with CAS. Independent research (see table) shows that in an analysis of the 20 amino acids in raw protein, the levels of the essential amino acids Methionine and Lysine are clearly higher in N-xt fertilized grass than in CAS-fertilized grass. On the other hand, grass fertilized with CAS has a higher percentage of Non-Protein Nitrogen. This is much less valuable as an element for forming animal proteins (milk or meat). When there is an imbalance between amino acids in the offered protein, it is much harder for the animal to absorb this protein properly. This explains why the cows of the Out family have needed considerably less protein from concentrates since the introduction of N-xt Fertilizers on the farm. 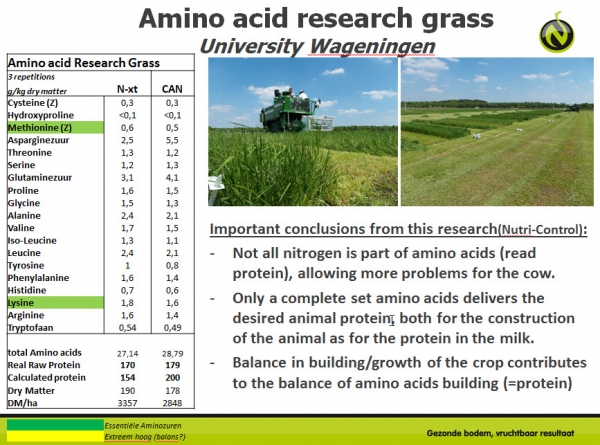