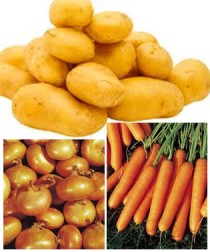 Our N-xt Calcium formula was developed for fertilizing crops with calcium that the plants will be able to take up. Potatoes (and for example also onions and carrots) take up calcium via their finest hair roots (the hair root tips) at the beginning of the growing season. This is the phase involving a risk of infection with scab, whose symptoms often become clearly visible later in the crop’s development.

Most potato growers are familiar with the principle of irrigation around the time of tuberisation and/or using acidifying fertilizers to effect the release of calcium and important trace elements to enable the crop to protect itself with them. But most growers now also know that such acidifying fertilizers are very damaging for soil life. They realise that they must compromise to reduce the risk of scab and ensure the quality they want. But that is no longer necessary!
N-xt Calcium is a fertilizer that can easily be sprayed in large droplets (using a 7-hole nozzle) after planting. It must however be done before using a rotary cultivator to make sure that the calcium will accumulate around the potato plants’ root zone. There it will be gradually released, but the plants may also actively take up the minerals from the fertilizer’s complex.

Below are some photos showing practical experiences in the past two years that clearly reveal the effect of N-xt Calcium. If it is combined with N-xt FertiVital, applied during planting, it will also reduce the risk of Rhizoconia on the skin (see the photo above).

What we have observed in many varieties is on the whole a better skin quality with less scab. NB: this treatment does not make potatoes more resistant to powdery scab infections, because such infections tend to affect a crop later during the growing season, and to a lesser extent in the early phase of tuberisation. The percentage of the efficient calcium provided by the N-xt Fertilizers will decrease during the growing season, so it will not have the same effect on powdery scab.
Below you see the results of our N-xt Calcium fertilizer in different potato varieties, sprayed after planting and before the use of a rotary cultivator: 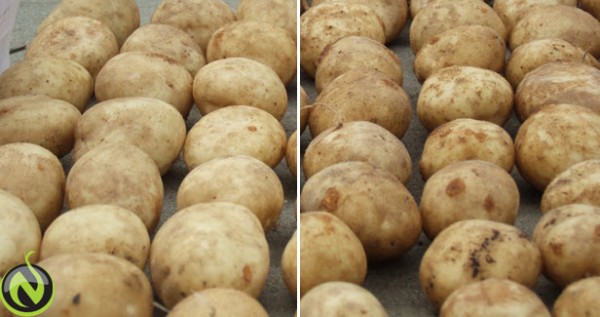