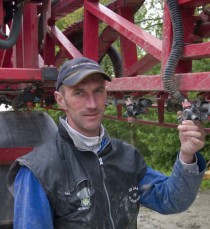 Jacco van Liere in Dronten has been using N-xt Fertilizers foliar fertilizers for his potatoes for four years now. And the effects of the liquid fertilizer products are obvious. He has been able to reduce his fertilizer nitrogen doses by 30 to 40%. And he says his potato plants are sturdier. “The plants also produce less foliage,” adds Van Liere. And he’s very happy about that because large amounts of foliage attract aphids and make grading more difficult. Van Liere runs a 330 hectare farm together with his brother Piet. They also grade onions.

For Van Liere the great benefit of N-xt Fertilizers liquid fertilizers is that they enable him to adjust his fertilizer doses easily.“ I can now give different potato varieties precisely the mineral doses they need. I have things better under control,” he explains. And having reduced his nitrogen doses so substantially he is now able to make more use of organic manure. “And that’s good for the soil.” The Van Liere brothers are convinced that the improved soil quality will pay back. They use manure in their extensive farming system. “And that can be excellently combined with N-xt Fertilizers.”

Van Liere is very satisfied with the effect of our foliar fertilizer on the Innovator variety of ware potatoes. He says that that particular variety begins to die off too soon, often already in early August. “But since I started using N-xt Fertilizers my crops last much longer, right through to mid-September at least,” he explains. “You see the crop’s colour changing after it has been sprayed. It’s almost a shame to have to kill it.”