A long period of drought is often followed by a nitrogen peak, giving rise to the risk of silage gases.
Because of the dry weather, the corn harvest has started earlier than normally, and corn ensiling has already begun. In a few places in the Netherlands, hazardous silage gases have been released. This problem not only occurs in the Netherlands but also in Germany, agricultural agencies have been warning against this phenomenon for some time.


The silage gases consist of nitrogen oxides, also called nitrous gases. The reason why this phenomenon is occurring this year is the combination of a long, dry period, which severely damaged the corn crop, followed by precipitation. The unused nitrogen from the soil and the manure and fertilizer from the past dry period suddenly become available. As a result the nitrate concentration in the soil moisture rises and the crop gasping for water absorbs both water and nitrate. This means the nitrate content of the corn also rises considerably, and the plants turn green to dark green. However, the crop is badly equipped to process the absorbed nitrate because of the stress caused by the past dry period and the reduced green leaf structure. The latter is the consequence of leaves getting burnt due to inadequate cooling. Because of the high nitrogen level the cobs take longer to ripen than expected.

The temptation is then to chop this corn and to manure it before the end of the month. After silaging such corn, brown-red nitrous gases can often occur after as little as one day. The gas production will increase for another four to five days, after which it will gradually decrease; it will disappear after 10 to 14 days.
Nitrous gases are extremely dangerous, and when they come into contact with the skin they can cause a blister as a consequence of the formation of nitric acid, which is a strongly corrosive acid. When they come into contact with the eyes the cornea can be damaged, and inhalation can cause irritation of the respiratory system and even a life-threatening pulmonary oedema!
Nitrous gases are heavier than air and linger above the silage as a yellow (low concentration) or red-brown (high and extremely hazardous concentration) cloud. 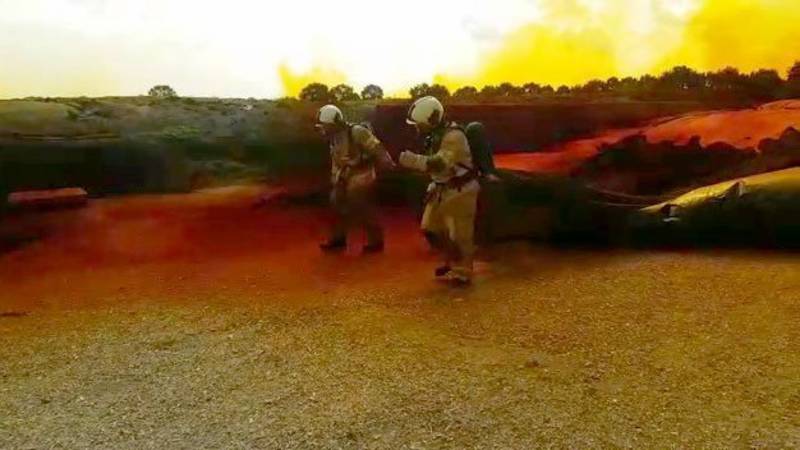 Be wary of harvesting and manuring too soon

We expect that this phenomenon will be much more widespread within a week or two, and that it will not only occur in corn but possibly also in grass silage.
We advise farmers to wait with chopping corn until the stem also dries out! For good silage (32-35% ds), both cob and stem must be sufficiently dry!
As a consequence of the drought and the low availability of roughage, livestock farmers want to do everything they can to produce extra grass in the late summer and the autumn. There is a great temptation to stimulate the grass to grow with extra manure and fertilizer, which will lead to exactly the same situation: cut grass with a high nitrate level in two to three weeks’ time.
Our advice is therefore to be careful with manure and with nitrate-containing fertilizer in particular. We are already seeing problems among farmers who graze their cattle.  Ureum levels are exploding, with values of well above 40. In silage this is evident from the crude protein level of more than 25 to 30 and a very high OEB! Symptoms of poisoning will occur within 3 to 4 days (sometimes within 20 minutes) of feeding high-nitrate grass silage. This is undesirable and must be changed (with extra aeration, structure, energy and minerals).

The grass still has a large amount of nitrogen available from soil mineralisation, slurry and nitrogen from previous fertilization that has not yet been used. To encourage the grass to grow, the advice is to spray Ferti-Vital (2 l/ha) now instead of nitrogen. This supports the growth of grass and stimulates root development. The latter is very important as a lot of grass has been severely damaged, both above and below the surface. As a consequence of the drought, the salt concentration in the soil has risen enormously and the CO2 level has also increased. This means the roots under the grass plant have been damaged, which inhibits the plant’s development. After the rain the grass should recover. This recovery process can be improved by using Ferti-Vital
(click here for more information about our new Ferti-Line products)
Please do not hesitate to contact us for further information.

“My cows make much better use of protein”